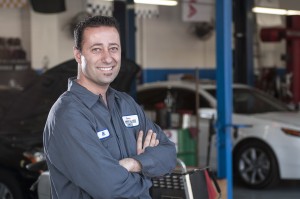 To absolutely no one’s surprise except perhaps his own, Eli Laow is a bonafide success. It helps having mechanical genes in the family – three generations of automotive mechanics and technicians on his dad’s side, two generations of aviation and auto mechanics and technicians on his mom’s side. You could also say that he was blessed from birth – and you would be right. But they’re blessings he’s earned, every step of the way.

He married the beautiful Michelle Laow in November of 2011. He opened Poway Import Auto Experts in February of 2012 and then on October 30, 2012, he and Michelle welcomed a joy-filled bundle of happiness named Adrianna.

It helps to know what you want to be when you’re growing up. Growing up in the automotive business, he was always fascinated with auto mechanics. By the time he was in high school, he and a fellow Poway High School (PHS) student had entered a state-wide, automotive contest for high school students. Sponsored by Perry Ford, the PHS student team came in fifth over-all – for the entire state of California.

His first job out of PHS was working at Pioneer Center Porsche and Landrover on Miramar Road in San Diego. From that time forward, he has rocketed to the top of his profession, acquiring an abundance of automotive skills and business savvy along the way. For thirteen years, Eli worked in the San Diego/Poway areas, growing his business the old-fashioned way: one client at a time. Loyal clients followed him from dealerships, to shops, to gas stations until at last, he opened his own shop: Poway Import Auto Experts.

His continuing success is based on many things – great automotive genetics; an enormous amount of warmth, support, and belief in his abilities from his entire extended family; his own abundance of talents and gifts; his drive and determination to be the best; his commitment to quality and excellence; his well-trained staff and crew; and the fact that he genuinely cares for each and every one of his clients and their vehicles. He is at the top of many online reviews and it is his clients—and his own hard work—that put him at the top.

When and if Eli ever has off-time, he’s a family man first and foremost. Next, he’s a Patriots fan, a Celtic’s fan, a Boston Red Sox fan, Boston Bruins fan … yeah, he was born and raised in Boston until he was four years old and his family moved to Poway … and became an even bigger BMW fan/addict! Have you seen his M Class BMW??!!

You could call him the vehicle whisperer, but please, don’t. He’s just a bright guy, with a quick smile, a big heart, and a bright future.

I used to hate bringing my car in for any kind of service...until I met Eli at Poway Imports. He is super nice and I can finally say that I trust my mechanic! 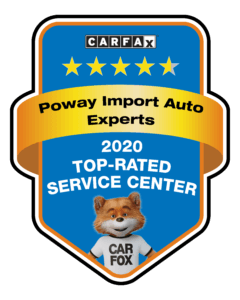